Decoupling – part of a transition to a low carbon, resource efficient green economic growth: Arup, UNEP, Forum for the Future

“Climate change is a result of the greatest market failure the world has seen. The evidence on the seriousness of the risks from inaction or delayed action is now overwhelming. The problem of climate change involves a fundamental failure of markets: those who damage others by emitting greenhouse gases generally do not pay.” Stern Review Report on the Economics of Climate Change

“Decoupling makes sense on all the economic, social and environmental dials. People believe environmental ‘bads’ are the price we must pay for economic ‘goods.’ However, we cannot, and need not, continue to act as if this trade-off is inevitable.

“Decoupling is part of a transition to a low carbon, resource efficient Green Economy needed in order to stimulate growth, generate decent kinds of employment and eradicate poverty in a way that keeps humanity’s footprint within planetary boundaries.”

At the end of January, on Arup’s website, Jonathon Porritt said that we must continue to pursue economic growth, (surely meaning low carbon, resource efficient green economic growth) progressively reducing environmental externality in terms of emissions of greenhouse gases and use of resources.

So is your decoupling glass half-full or half-empty?

Here’s how the half-full lobby sees it

innovation in every field of energy, transport, water, waste, land use and manufacturing is consistently delivering ‘more for less’ every year. For instance, global emissions of CO2were still up in 2012 (by 1.4%), but the global economy grew by 3.5%. Decoupling at work. Even in China, carbon intensity (a measure of CO2emitted for each dollar of GDP) fell by a mighty 4.3% (see NYT).

And here’s the half empty lobby:

That’s all well and good, but still hopelessly inadequate. China’s 2012 CO2emissions still increased by a massive 300 million tonnes (despite the 4.3% efficiency gain), representing around three-quarters of the total global increase for that year.

The wealth of new decoupling technology on display was mind-boggling. Even Abu Dhabi itself (one of the most profligate of all nations in terms of per capita energy and water use) is now starting to think seriously about decoupling in terms of its three great energy and resource guzzlers: desalination, air conditioning and construction. 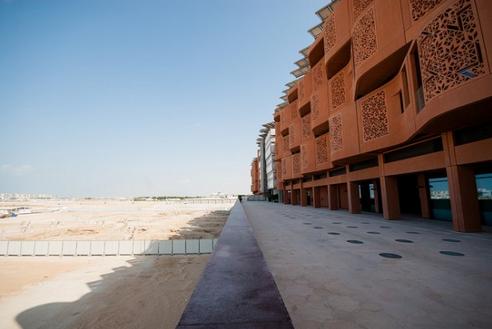 The evolving shape of Masdar City 2013 – a site that produces its own energy and is a platform for the newest ideas of sustainability.

And lots of decoupling synergies are kicking in: for instance, I spoke with three small companies pioneering building-integrated concentrated photovoltaics combined with co-generated heat, for use in air conditioning or more much efficient desalination.

It’s not technology that’s the problem: it’s the politics and the finance

But I suspect nobody knows better than Arup’s engineers that it’s not technology that’s the problem: it’s the politics and the finance. And even my glass-half-full approach in The World We Made has to be tempered by extreme caution on that front!