Keep the engines of capitalism working? Or find a beneficial alternative?

Following the summary of yesterday’s article by the Times’ Jenni Russell, a second analysis is made by John Wight in the Huffington Post article. He writes:

“The liberal order has collapsed and no one should mourn its demise, for on its tombstone is engraved the disaster of Afghanistan, the murder of Iraq and Libya, and the unleashing of an upsurge in global terrorism and religious fanaticism on the back of the destabilisation wrought across the Middle East in the wake of 9/11. Married to a refugee crisis of biblical dimension and the closest we have ever been to direct military confrontation with Russia since the Cold War, these are the fruits of this liberal order abroad.

“Meanwhile at home its moral and intellectual conceit has produced obscene levels of inequality, alienation, and poverty, exacerbated by the worst economic recession since the 1930s and the implementation of that mass experiment in human despair, otherwise known as austerity, in response.

“Tony Blair, Barack Obama, and Hillary Clinton epitomise this failed liberal order – leaders who perfected the art of speaking left while acting right, presenting themselves as champions of the masses, of ordinary working people, while worshipping at the altar of the free market, cosying up to the banks, corporations, and vested interests”.

He emphasises that politics is not a mere parlour game and says that both Jeremy Corbyn and Bernie Sanders are fully deserving of criticism for taking positions and an approach which has suggested that for them it is, continuing: 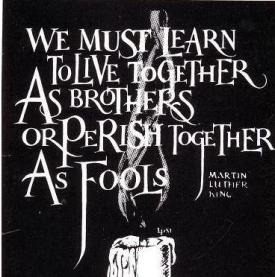 “Demoralisation and defeatism is never an option”.

Agreed, but there are better prescriptions than those he outlines in his final paragraphs.

Jenni Russell sees ‘the anguished question’ as being how to remedy the acute problems of inequality, while keeping the engines of capitalism working.

Should we instead try the engines of co-operation, peacebuilding, mutuality and increasing self-provision?