Extracts from John Wight’s latest post, which goes right to the heart of the matter:

The huge disparity in wealth and power that exists today in British society has created an chasm in outlook, with the decimation of Labour in Scotland irrefutable evidence of an end to politics as usual. Decades of Thatcherite nostrums, embraced by both Tories and Labour alike, has left millions marginalised and effectively disenfranchised, yet going by the response of the Labour Party hierarchy to the party’s humiliating defeat at the last general election, you would think they were living in a parallel universe.

Mimicking the Tories on austerity, immigration, and welfare can be described as many things, but progressive politics it is not. Austerity is no more than a mass experiment in human despair. It is not only morally reprehensible, it is economically illiterate, given that it is designed to reduce the consumption of the poor and those lower down the income scale, and with it the demand for goods and services that forms the basis of any healthy economy . . . 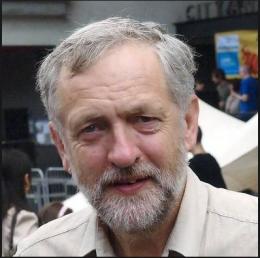 Jeremy Corbyn represents the last vestige of hope for a Labour Party that is now almost unrecognisable from its founding principles of equality and social and economic justice for working class people.

Its high water mark came in the postwar period, when led by Clement Attlee it came to power committed to transforming British society from the bottom up, challenging and defeating in the process the vested interests and economic power of the elite. It saw for the first time in Britain a government acting as a check on the unfettered power of market forces rather than an enabler of them.

Faced with a national debt of over 200% of GDP its achievements were phenomenal, responsible for forging a humane society in which working people were regarded as the end instead of the means to the end, a first in the nation’s social history.

In 2015 we are living in a cold, cruel, and desolate country in which benefit sanctions, foodbanks, poverty wages, and ignorance reign, governed by a clutch of rich, privately educated sociopaths whose conception of society has been ripped straight from the pages of a dystopian novel.

Jeremy Corbyn remains one of the few members of parliament that have refused to succumb to this normalisation of brutality, and indeed is among the last of the Mohicans within the PLP who can sing the party’s anthem – The Red Flag – at its annual conference without experiencing pangs of hypocrisy.

John Wight ends, “His bid for the leadership of Labour is a serious one. The only candidate who can legitimately claim to be standing for the values the party was founded on, the political and media establishment underestimate him at their peril. If he wins it will change everything. As such, it is up to us to make sure he does”.

The Green Party would take the UK out of NATO . . .

Given the unstable situation in many parts of the world, but particularly the situation in Ukraine, and in the year in which we mark the centenary of the start of the First World War, now is a good time to reflect on the profound failure of our existing foreign policies to deliver peace and stability in the world. NATO was established for mutual defence during the Cold War and should have been disbanded when it ended. As a nuclear-armed alliance with more than 5,000 weapons, it significantly contributes to threats to the world’s safety.

What do our readers from nineteen different countries (left) think of Howard’s conclusion?

It is no longer possible to tolerate the reckless decision making of NATO.

These heads of state have been responsible for countless civilian deaths in Afghanistan, they have torn Libya and Iraq to shreds and are poised to plunge us deeper into this grisly mire of warmongering in Ukraine.

Money going into war is money going out of communities. 500,000 people had to resort to foodbanks last year. Inequality grows with each passing moment.

War is the enemy of the poor. It is the biggest polluter and a vile instrument of moneymaking.

NATO is a military-oriented body, which imposes conflict cessation rather than encouraging peace building. As such, it is not a sustainable mechanism for maintaining peace in the world.The Green Party would take the UK out of NATO unilaterally.

The previous Saturday the Green Party joined with ‘Stop the War’ and the ‘Campaign for Nuclear Disarmament’ in organising a ‘No to Nato’ march in the NATO host town of Newport, protesting against the role NATO continues to play in world politics.

Anne-Marie O’Reilly has sent an emessage pointing out that 27% of children in the UK are growing up in poor families, 20,000 disabled people will lose support for the basics in life when the Independent Living Fund closes and thirteen times more people are visiting foodbanks than did five years ago.

Despite this Britain’s military spending was set at £38 billion in 2014 – a figure confirmed by the Financial Times.

As CAAT’s Outreach Co-ordinator she stresses that it’s time to shift priorities. It is hoped that a Global Day of Action on Military Spending on Monday 14th April will turn the tide on military spending and readers are asked to share these powerful spending comparisons on Twitter and Facebook.

Global Day of Action on Military Spending event in India 2013 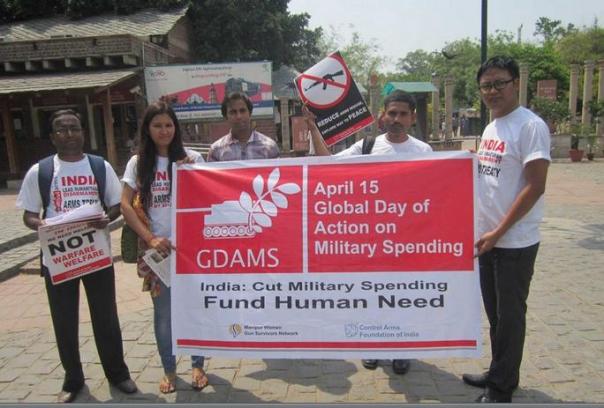 A Lancashire reader writes: ”It would be excellent if donors to foodbanks chose to support local village or high street independents rather than buy their donated food from the large corporates.

“If someone stands to benefit from the purchase of the donated food, let it be the small and medium sized businesses that are of great value, as the money is likely to remain within the community instead of going to wealthy foreign investors like Warren Buffett who always profits from the little man and the poor.

”A PR exercise to boost the sales of the large corporate retailers, one in particular, is under way, as people flock to their stores to spend their money instore while also supporting “the cause” by buying extra items. Of course our favourite retailer – Not – will top up food donations by 30% on 5th & 6th July. Think of what they will earn on the rest of the shopping of the generous customers attracted to the project who may not have shopped there before.

(On the website of one such store we read that, “customers will be given special shopping lists to encourage them to buy everyday food items like cereals, rice, instant coffee, tinned food and sauces. Collections will take place between 9am – 6pm in Tesco stores).

“I am very wary of the large retailers having such a hold over this project and taking over yet another controlling role giving them even more political sway than they have already.

“This may also provide an over-generous income stream for charity organisers commanding a lucrative salary and the often over-indulgent expenses connected with their work while the front lines are staffed with volunteers”.