Could British farmers build a vote-bank and influence policy?

On another website, we read that in India, farmers only appear on the economic radar screen of the country when elections are around the corner (original source: Ground Reality).

Not so in UK. Whereas 43% are employed in Indian agriculture, British farmers and employees registered to vote are only 1% of the country’s population according to the World Bank’s interesting list and so are not regarded as politically significant, despite their vital role.

Is building a vote-bank the British farmers’ only chance of a fair deal?

A call, not to back a particular party or candidate but a policy such as the one set out by Farmers for Action (NI) and other farm groups (below), which commissioned the drafting of a parliamentary bill on farmgate prices. If successful it would return farmers a minimum of the cost of production plus a margin inflation linked across the staples.

A vote-bank could be built by enlisting the support of the public and those who do business with dairy farmers:

Douglas Chalmers, when regional director for the Country Land and Business Association [North], said “Agriculture . . . supports jobs and services in the local villages and often the larger towns, especially if there is a market . . . As farming loses critical mass, all the agriculturally dependent businesses become unsustainable, and with no vets, marts, hauliers and merchants, further pressure is felt by those who have continued to farm . . .” He continues:

“We ask for a fair deal: that those who set policies and impose legislation consider the wider and real effects of their actions on individuals, farms and businesses in rural areas”. FG: 9.1.04

The problems being faced by dairy farmers do not stop at the farm gate but threaten the thousands of other business and jobs both locally and nationally.

Maintaining viable dairy farms not only protects livelihoods of farming families and others directly involved, it also makes a major contribution to local economies and the future of businesses, jobs, and families in the locality.

That is the key message from dairy farmer’s wife, Kathleen Calvert (left), who asks for a fair deal for dairy farmers who receive a significantly lower share of the retail milk price than they did ten years ago, despite considerably higher costs:

“Payment which covers production costs and overheads must be the norm for British food producers. This money will circulate around individual rural communities through the supply of professional goods and services to the prime producer, helping to provide a diverse range of other employment opportunities that support individual families within rural communities.”

Dugdale Nutrition, one of the 60 local businesses with which she trades, specialises in feeds for ruminant animals, its core market being dairy farming. This means its 49 employees and their families rely heavily in turn on local dairy farms for their livelihood. Matthew Dugdale, managing director of this company which has supplied the Calvert family for three generations, explains: “Dairy farming is like any business, needing a fair and sustainable price for its product to ensure a fair income for the long hours worked and a decent return on the often large amounts of capital employed, and very importantly, surplus profit to reinvest for the future.”

Locally based businesses circulate profits within the communities they serve. In turn they are reliant on viable, widespread and profitable farm businesses adding immense value to local economies. It is in their interests to see that farmers get a fair price for their produce.

Seeking food supplies from Turkey and Morocco?  Time for change!

On BBC Radio 4 today it was reported that some supermarkets are limiting sales of fruit and vegetables. 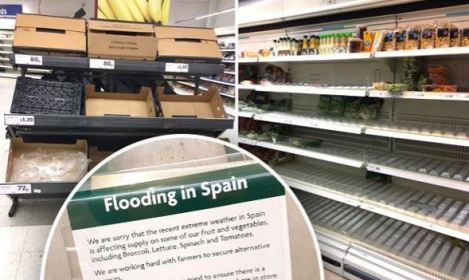 A newspaper elaborates: “Morrisons and Tesco have limited the amount of lettuce and broccoli after flooding and snow hit farms in Spain. Shortages of other household favourites – including cauliflower, cucumbers, courgettes, oranges, peppers and tomatoes – are also expected. Prices of some veg has rocketed 40% due to the freak weather. Sainsburys admitted weather has also affected its stocks”.

HortiDaily reports on frost in Europe in detail (one of many pictures below) and the search for supplies from Turkey, Morocco, Tunisia.

A former Greenpeace Economist foresees these and more persistent problems in his latest book, Progressive Protectionism.

So the ‘dream team’ was not elected – now, more of the same

At least, one writes, there will not be the heartache of watching such a team fail – as did the widely hailed Blair and Obama – beset by vested interest and failing to fulfil expectations. Instead on past record there will be:

Soapbox 499 – for the 99%: does government turn ‘a blind eye to corporate rule’ or aid and abet its food commodities masters?

Without a shadow of a doubt, the corporate-political nexus is definitely paving the way for factory farming.

The claim of corporate responsibility is a sham. It means nothing and is entirely dishonest.

Anything and everything is being used to beat family farmers and the small producer over the head, and producers who are encouraged to invest are being led into a dangerous trap.

Government promises of scrapping of quangos and regulations were meaningless and once a token gesture was accepted the quangos have gone into overdrive to help satisfy the pincer-like hold the corporates have over the family farmers and small to medium sized producers.

It is no coincidence there are 15% less farmers on supermarket aligned contracts in the last year and one by one dedicated contracts will be quietly dropped.

We are in the grip of large corporate retailers and two large foreign processors who, by stealth, are gradually forcing efficient small and medium sized producers out of business or trapping them into slavery by encouraging fruitless investment.

They are exposing producers to intense financial risk in the market as government turns a blind eye to corporate rule and practices such as price capping, unethical collusion behind the scenes.