A provisional Labour election “grid” which was leaked to the Sunday Times is said to reveal that while Mr Johnson is framing this as “a Brexit election” Jeremy Corbyn will continue with two main themes. 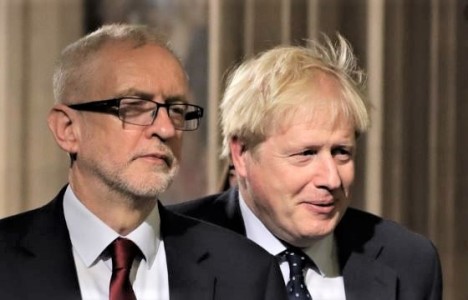 He sees Brexit leading to a “toxic Trump trade deal”, opening up the health service to rapacious US corporations and will challenge PM Boris Johnson about the claims in a recent Channel 4 Dispatches programme, alleging that the Tory government was secretly discussing NHS drug pricing in the context of a possible post Brexit US trade deal.

The FT journalists say that the risk that voting might take place against the backdrop of one of the NHS’s periodic winter crises, “keeps Tory strategists awake at night”.

The BBC and Financial Times have seen a leaked internal government document marked “Official Sensitive”. This “Update to EPSG (Economic Partnership Steering Group) on level playing field negotiations” was drafted by DExEU, the government department for exiting the EU.

The document suggests that Mr Johnson – a persistent critic of what he sees as unnecessary regulation from Brussels – wants to diverge ‘significantly’ from the EU on regulation and workers’ rights after Brexit, despite a pledge to maintain a “level playing field”.

The FT reports that it was told by one senior adviser to Mr Johnson, “We’re not confident at all. Of course this is a gamble. But it’s the least worst option.” Mr Corbyn’s supporters expressed confidence in his campaigning ability, first shown in the 2017 election, when he captured 40% of the vote.