Matthew Parris writes in the Times, “the cracks are showing in austerity Britain”

We don’t think enough about local government, one of whose jobs it is to mend potholes. When in our own lives our nearside front tyre is shredded, the pothole, Parris believes, represents “a momentary twitching-back of one tiny corner of a great curtain, behind which lie, no, not potholes, but a million anxious human stories, caused in part by cuts in public spending”.

He adds that accidents due to potholes are usually relatively trivial compared with cuts which for others may have meant:

Potholes are a parable for others that matter even more. Unfilled potholes put lives at risk and have become a symbol of the damage done to every walk of life by spending cuts.

All the pressures on those who run government, local and central, are to worry about the short-term. it is usually possible to leave issues like road maintenance, decaying school buildings, rotting prisons, social care for the elderly, Britain’s military preparedness or a cash-strapped health service, to tread water for years or even decades. “They’ll get by,” say fiscal hawks, and in the short-term they’re often right.

Parris continues: “But beneath the surface problems build up. The old get older, and more numerous. Potholes start breaking cyclists’ necks. Care homes start going under. The Crown Prosecution Service begins to flounder. We run out of social housing. Prisoners riot. And is there really no link between things like pre-schooling, sports and leisure centres and local outreach work, and the discouragement of knife crime?”

“When New Labour was elected in 1997 we Tories groaned as it tipper-trucked money into the NHS, school building and other public services. Thirteen years later when Labour left office the undersupply was monetary, the red ink all too visible”.

One answer: Green & Labour Party leaders would meet these needs and avoid red ink by redirecting the money raised by quantitative easing.

“Is it a ‘success’ having thousands of elderly, immobile people in care or nursing homes, with Parkinson’s or Alzheimer’s, post-stroke or myocardial infarction; blind from macular degeneration or deaf; incontinent and catheterised, unable to tend or feed themselves but living out some form of existence? I rather doubt it from a quality of life point of view, not to mention the strain it places on health and social care resources”.

Bronwen Maddox, director of the Institute for Government and formerly an investment analyst in the City and on Wall Street, focusses on the argument that ‘we’ are about to see “the end of inheritance”, stating that the assets of the British middle-class will have to be spent on their own care in their later years.

Ms Maddox adds that some MPs are suggesting that government try to encourage people to see the equity in their homes as a resource while prompting the financial services industry to develop cheaper, more flexible products for extracting it.

Emma Duncan, editor of the 1843 magazine and former deputy editor of The Economist, wrote today in The Times: “Seeing my mother spend her final years longing for death has convinced me the law on assisted suicide must change”

“My brave mother, who could meet pretty much any challenge with her head held high, was brought low in the end. As her spirit faded, the one thing that still got her going was the law on assisted suicide. It infuriated her. She could not see why she should be kept alive, unwillingly and at great expense. She asked me several times to put a pillow over her head or take her to Dignitas, but I pointed out that I could be charged with assisting her suicide, and it would be tiresome for my children if I were jailed, so she gave up. But she never stopped complaining about the law, or sending money to Dignity in Dying, in an attempt to get it changed.

“To honour her spirit, I shall be taking up the cause she espoused

“Her case, which she continued to put cogently to the end of her days, was twofold. The first argument was about freedom of choice. Our laws are, by and large, governed by the notion that people should do what they want so long as it doesn’t hurt anybody else. My mother wanted to die, but suicide is impossible for the old and frail, though for a while she tried starving herself to death. Why, so long as she was settled in her mind — something which an application to a judge, with a lapse of time between request and confirmation, could establish — would the state not make it easy for her to do what she wanted to do?

“The second point was about cost. She thought it a horrible waste that hundreds of thousands of pounds were being spent on keeping her alive when they might have funded better education for people starting out on their lives. And it was going to get worse as society aged. “Think of the waste!” she would say. “It’s simply ghastly!”

“When I would point out that changing the law might cause some suffering, of old people bullied into suicide by greedy relatives, for instance, she countered that Switzerland and the Netherlands, with liberal regimes, report no such problems”.

Emma’s mother believed that the balance would shift heavily in favour of a law liberal enough to let even those without terminal diseases end their lives.

Emma ended: “We will be cremating my mother’s body tomorrow, but to honour her spirit I shall take up the cause that she espoused. I believe, as she did, that change will come. And the sooner it comes, the better it will be for brave people who want to take control of their death rather than be vanquished by old age”.

“He did not have a good death”: these reticent words from a grieving widow were all that she felt able to say of the prolonged intense emotional and physical suffering her husband endured before his death. She added, “I have joined Dignity in Dying”. Another acquaintance last week told the writer that her father, in similar circumstances, had asked for strychnine to be procured for him.

A condition not included in the demands of this organisation but recognised by medics and Dignitas as terminal, is dementia. Dementia is not just an enhanced state of memory loss – an inconvenience – but can adversely affect the whole personality. One who shared care of a formerly bright and independent relative with this condition for two years had to contend with extreme physical aggression, incontinence and refusal to wash.

It is the core goal of Dignitas that one day nobody in the UK or any other country needs to travel to Switzerland for a self-determined end of suffering and life anymore.

People who would opt for assisted dying when diagnosed with dementia, and who have made the declaration whilst still in good health, should be given every facility in their region. For years Scandinavian countries have had a range of acceptable provision and a few American states. Only Switzerland kindly offers this facility to foreigners. As respected journalist Simon Jenkins notes, an average of twenty people a month kill themselves ‘surreptitiously’ at home and two terminally ill people a month go to Switzerland to end their lives.

At the moment the medical and care industries – a powerful parliamentary lobby – have a vested interest in prolonging the unhappy lives of such people, profiting by payments from their families and the state.

The human right to control the circumstances of one’s own death was asserted by Dr Atul Gawande in a recent Reith lecture.

Simon Jenkins wrote that right-to-die campaigner, Debbie Purdy’s life and death by self-starvation – forced on her by parliament – should be celebrated by the Commons passing the House of Lords’ “dignity in dying” bill forthwith.

As he continues: an overwhelming majority of the public – 60-70% – wants it. The weight of legal and ethical opinion wants it. Eighty of the great and good writing to the Daily Telegraph at the weekend want it. Objection, he adds, is largely confined to religious prejudice and medical authoritarianism.

Simon Jenkins concludes that Debbie Purdy’s husband thanked the Marie Curie hospice in Bradford for helping his wife through the awful experience of self-starvation forced on her by parliament:

“How much better if he were now able to thank parliament for relieving others of having to face the same ordeal”.

Is it a coincidence, that – as the use of glyphosate rises – so does the incidence of Parkinson’s disease, senile dementia, childhood autism, prostate cancer and many other conditions?

Glyphosate was first marketed in 1976 and its use has greatly increased since 1995, when it was first used with genetically engineered crops. GE crops absorb glyphosate through direct application, and from the soil. It cannot be washed off, is found in rivers, streams, air, rain and food (according to the US National Center for Biotechnology Information).

Note that most recording and research comes from American sources

Graphs of death rates for Parkinson’s, Alzheimer’s and senile dementia have been plotted against glyphosate applications to U.S. corn and soy crops. Dr Swanson notes that the correlations are quite strong. American deaths due to Alzheimer’s have been rising since 1980, but there was a sharp spike in 1999. 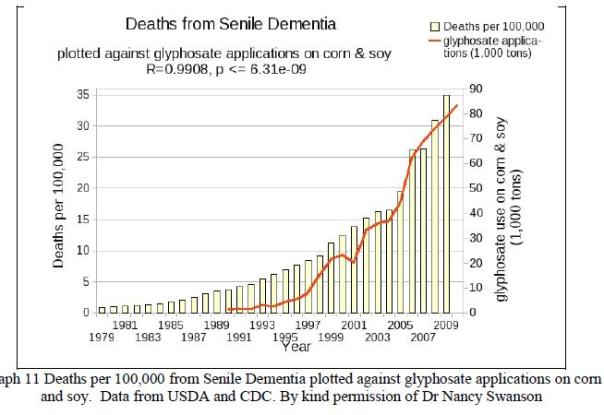 Dr Swanson points out that correlation does not necessarily imply causation and there are now a host of other chemicals in our food and our environment.

Britain: an increasing number of cancers and neurological diseases such as Parkinson’s, Motor Neurone Disease and MS – and glyphosate in rivers and drinking water

In a new review paper written by Dr. Rosemary Mason (MB, ChB, FRCA) – medical doctor and naturalist – and submitted to the Scottish Parliament, glyphosate is shown to destroy both human health and biodiversity. She has compiled information from a global network of independent scientists, toxicologists, beekeepers, Industry, environmentalists, governments and regulators, noting that:

“UK has an increasing number of cancers and neurological diseases such as Parkinson’s, Motor Neurone Disease and MS. We have just had our drinking water analysed in Germany and we have glyphosate in it and in our rivers! Wales, like Scotland has epidemics of type 2 diabetes, obesity and autism”.

This water testing was a private initiative – in Scotland the water is not tested – see a FOI response to Graham White.

Dr Mason says: “We asked the Environment Agency why the most used herbicide and the most used insecticide isn’t being measured in groundwater and they said it wasn’t necessary”.

Though the presence of glyphosate in other British waters is also not tested for/recorded, Monsanto has commissioned a report on removal methods by Swindon-based Water Research Centre: WRc Ref: UC7374/14690-0 July 2007: WRC General Report – Roundup.

Her paper can be downloaded here: Glyphosate – Destructor of Human Health and Biodiversity

Dr Mason notes that agrochemical corporations wield tremendous control over the British and American governments and influence the formulation of pesticide regulations – effectively controlling human health and biodiversity.  She presents a Cancer Research UK graph recording the incidence of prostate cancer in Britain; to the untutored eye the trajectory looks chillingly similar to the American graphs. 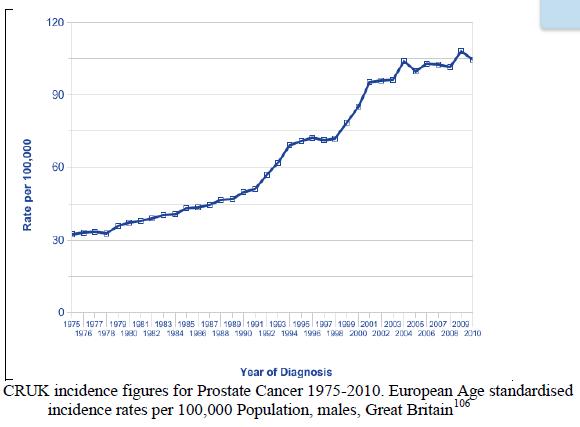 Rosemary Mason looks at one example of investment in the medical sector and political funding:

“AstraZeneca’s Oncology Website predicts: “Cancer claims over 7 million lives every year and the number continues to rise. Deaths are estimated to reach 12 million by 2030.”

“Michael Pragnell MA MBA, founder of Syngenta, was appointed a Trustee of Cancer Research UK (CRUK) in March 2010 and Chairman in November 2010. CRUK is donating £450 million/year to the Government’s Strategy for UK Life Sciences – see the relevant government website, page 9. #

Dr. Nancy Swanson received her Ph.D. in physics from The Florida State University and then worked as a staff scientist for the United States Navy. She  taught physics at Western Washington University and holds five U.S. patents. She is the author of over 30 scientific publications and two books on women in science. More detail here.