Will government stand by its pledge to wind down coal-fired power generation?

Government has pledged that all UK coal-fired power generation must end by 2025 and it accounted for less than 7% of UK power generation last year. That helped to push down UK carbon emissions to levels last seen in 1890 and to cut greenhouse gases faster than most other developed economies.

It is startling – in view of the government’s pledge – to learn that coal is still being imported from Russia, Colombia and the United States. GEGB engineers in the 70s complained about the imports of inefficient ‘dirty’ coal from Eastern Europe whilst good quality British coal was being stockpiled.

Muir Dean – one of many open cast mines closed in 2016

It is even more startling to read that a local coal mining company, Banks Group, which mothballed its Rusha mine in Scotland early because it couldn’t get a good enough price, has applied to extract coal from land behind the sand dunes of Druridge Bay (below). The social, economic and environmental objections received were deemed ‘insignificant’ by Justice Ouseley in the High Court.

The planning application submitted by Banks Group was approved by Northumberland County Council in July 2016. In September the plans were put on hold subject to a government inquiry. In March 2018, the proposal was rejected by the Communities Secretary Sajid Javid, citing among other environmental reasons the “very considerable negative impact” the opencasting would have on greenhouse gas emissions and on climate change, as well as on landscape and heritage assets. 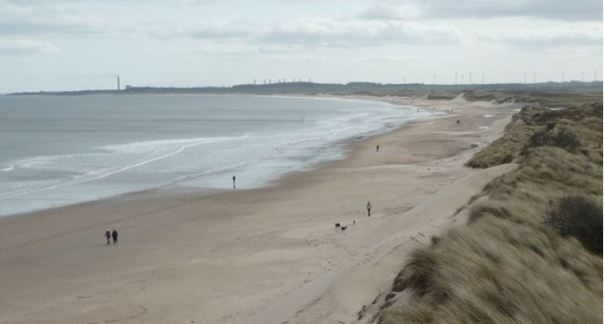 The high court over-ruled Sajid Javid’s decision in November and James Brokenshire, the minister for communities and local government, is to re-examine the application.

Gavin Styles, managing director of Banks, had described Mr Javid’s decision as perverse and political: “the government . . . has now demonstrated that it would prefer to source the coal that is essential for a variety of important industries across the UK from Russia or the US, rather than support substantial investment and job creation plans in our region.”

Anne Harris of Coal Action Network, which is fighting Banks’s plans across the north-east, said: “If James Brokenshire approves this scheme at Highthorn, he’s showing the government has no intention of meaningfully following through on the 2025 coal phase-out. It would mean the concerns and opposition of people in the area are being ignored for a coal company that’s trying to grab resources and run.”

All sides have submitted their case to Brokenshire, who will begin his deliberations on Friday.