Alan Simpson opens: “The nation is at war. Peacetime production has slumped, foreign travel collapsed, casualties rise. In every part of the country, people anxiously worry about how to avoid the enemy. This time, however, it is germs, not Germans, that we fear!”

What Britain needed was wartime mobilisation for peacetime survival. Instead handwashing and a mêlée of ‘unofficial’ messages have been offered that simply add to public confusion and anxiety.

He sees Boris Johnson’s preference for encouraging individual behaviour change (rather than more interventionist ‘test-and-trace’ and ‘social distancing’ policies) as likely to deliver a slower drift into a much deeper problem.

Most offensive of all is his claim that ‘herd immunity’ is what will save us is offensive, because “throughout history, herd immunity comes only after widespread infection and substantial death rates. Even the benefits are often short lived; with immunity not comprehensively passed on to succeeding generations of the herd”.

Johnson’s policy of turning his back on more interventionist measures, may result in ‘A Very British Cull’; ironically, one getting shut of large numbers of the voters who put him into power.

Simpson’s article predicts – according to the pattern revealed in Italy – that in less than three weeks – assuming the rate of increase remains constant – the total number of cases in Britain will have exceeded 16,000.

The World Health Organisation now says that China’s most effective strategy was the extensive testing, pro-active detection and immediate isolation of patients. This is what rapidly reduced infection rates. By choosing not to adopt vigorous ‘test-and-trace’ policies, Britain has opted not to know precise numbers. Simpson anticipates that by the end of three weeks, the capacity of the NHS to deal with the Coronavirus epidemic will be close to breaking point.

His generation (the older generation) mustn’t miss the chance to face painful home truths. Coronavirus is to the elderly what climate is to the young. If population growth is a problem, it isn’t the kids. It’s those of us living longer. Coronavirus has grasped this in a way that prejudice doesn’t.

Far too often climate campaigners come across indifferent (older) voices saying “It’s population, not climate, you should worry about. So let’s look at the actual numbers. According to the UN, out of today’s global population of 7.6 billion there are about 2 billion children (under 15). By 2100, when the population may rise to 12 billion, the number of children is projected to be … 2 billion.

An economic implosion in 2020 is unavoidable

No amount of Central Bank interest-rate reductions will avert this. Societies that are afraid to go outside, or share the air they breathe, and have lost faith in the safety nets they once took for granted, are only ever semi-functional. But it is around the silver linings of such a collapse that tomorrow’s New Jerusalem will have to be built.

The silver lining to a dire situation

In the absence of government leadership, whole communities have been quietly stepping up to the plate; providing the leadership the nation lacks. In Wuhan, an impromptu army of young volunteers, transporting food around on empty buses, has delivered the food and medicines that has kept others alive. It is what happens in a war. Dad’s Army, Mum’s Army and (increasingly) Kid’s Armies have stepped in, providing the emergency safety nets their society needs. One way or another, we are all following China’s lead. In the UK, the most visible sign of this came from those volunteering as emergency responders; providing non-medical support services to the NHS.

As self-isolation increases, it appears too in local support networks. We’re part of a neighbourhood ‘internet Group’ that offers shopping and support to anyone self-isolating. Go onto Twitter, WhatsApp or Facebook and you will find these in their thousands, all across the country.

Some reports suggest that up to 3 million UK volunteers are stepping in this space. Increasingly, as older/more vulnerable members self-isolate, it is younger people who underpin these safety nets. Slowly, we are rediscovering what previous generations did in wartime. They called it ‘social solidarity’.

Simpson forecasts that today’s crisis will see carbon emissions tumble, pollution levels plummet, and a generation of younger people emerge as social saviours. Around them a very different Green New Deal must then be written. Tomorrow’s security will require a more circular, cleaner, inclusive economics. It will have to put back to the planet more than it takes out, and turn its back on beliefs that we can just shop our way from one crisis to another. This won’t be before time.

August, who lives in Moseley, sends a first-hand account of Birmingham students’ march against climate change. 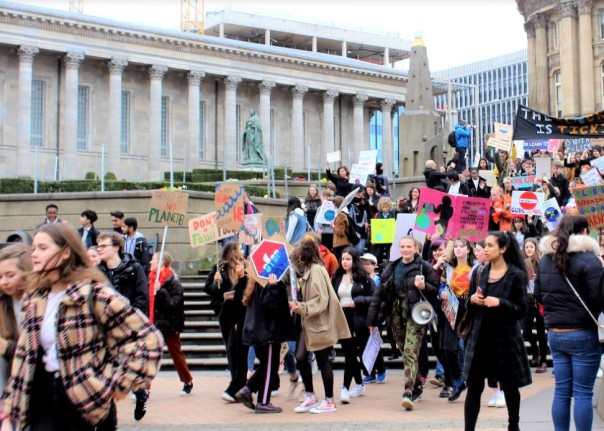 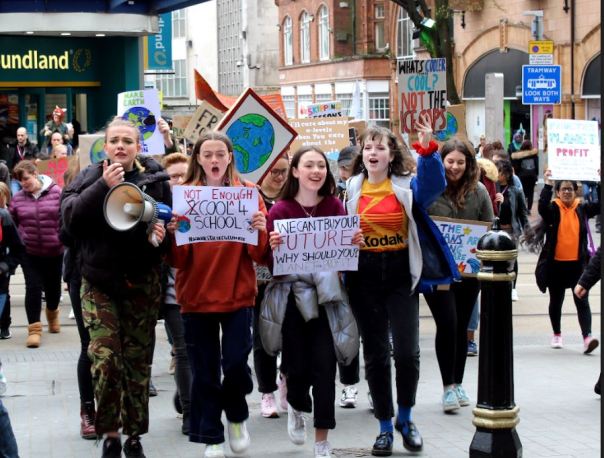 Youth Strike 4 Climate coordinated young people from various educational establishments across the city who met up in the city centre. 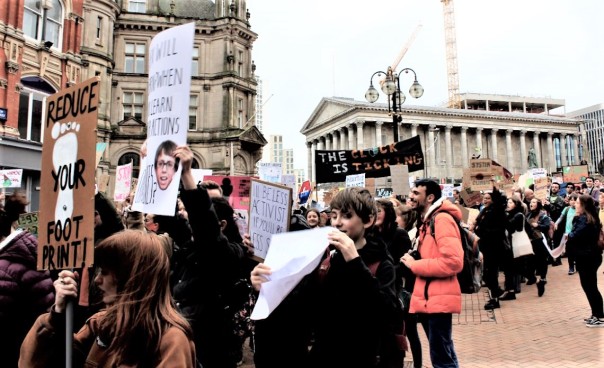 They marched from Victoria Square, down New Street, through Pigeon Park and back to Victoria Square to protest against the inaction of governments to tackle climate change.

The march was organised by Katie Riley, a Birmingham student. She spoke at the rally, saying: 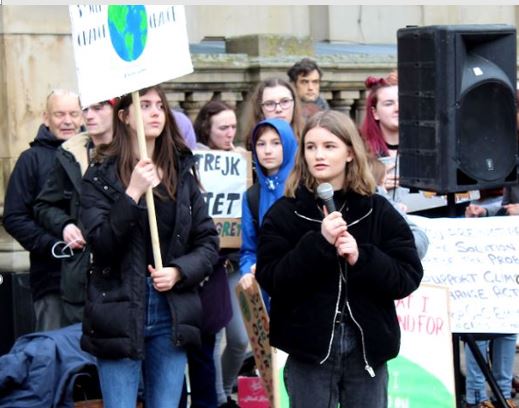 “Educate the youth of tomorrow and the parliament of today because people who don’t know what climate change is about don’t know how dangerous it is. Some people think the topic is dull and boring because the curriculum makes it like that. So, we need to change how people view climate change in order to get the change we deserve.”

Similar events have taken place in 100 British towns and other cities including London, Edinburgh, Canterbury, Oxford and Cambridge, calling for urgent action to tackle climate change, cut emissions and switch to renewable energy.

A few hours later a message was received from Irish colleagues, sending a podcast with messages from two 11-year-olds, Eve O’Connor and Beth Malone, who are involved in the schools climate strikes movement. Thousands turned out in Dublin and demonstrations were held in many towns.