This weekend’s focus on the role of Prince Charles

Though in theory opposed to the concept of monarchy, the writer finds a head of state drawn from the present royal family infinitely more acceptable than one drawn from the suborned governing elite.

The Financial Times has directly or indirectly featured the prince’s work in articles this weekend:

At 1.30 – Radio 4 will ask if Prince Charles’ activism is compatible with the position of King: http://www.bbc.co.uk/programmes/b047w9kn

The writer’s theory: vested interests – including those in the fields of modern architecture, conventional energy generation, intensive agriculture, pharmaceuticals and construction – are understandably afraid that if he becomes king and his ‘activism’ continues, their interests – and therefore profits – will be seriously affected.

This weekend’s focus on the role of Prince Charles: the first comments

Ranging from unqualified agreement to qualified approval and – finally – a warning: 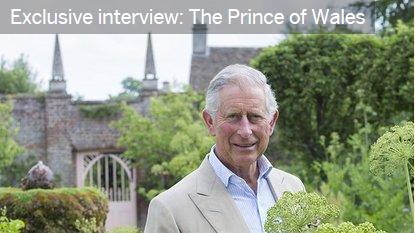 I saw some of the Prince of Wales’ work in the Jewellery Quarter when I worked there for 11 years in the 1980s and was impressed with him. He had his working building there and regularly turned up and saw young people who wanted to start up in business. I knew some of those he had helped: he kept in touch with them and visited the area to see them.

Prince Charles is one of the very few people in a position of influence who actually has some grasp of the nature and magnitude of the ills that face the world, and is doing a great deal to help put things right.

Privilege and the wealth and power that go with it are easily abused but at least they can solve the problem that faces everyone who wants to step outside convention and hence to push things forward – of how to keep body and soul together without joining the rat race.

Most scholars alas these days must spend half their lives, literally, chasing grants, and often finish up taking money from people they would rather not have dealings with. This is a huge and growing problem and privilege when well used overcomes it. (Writing books used to solve the problem in part but publishing alas is not what it was).

Agree, don’t like monarchy in principle. But what’s a Prince supposed to do…? I believe he should have an opinion, if one ‘for the best of the future of the country’, even if that rustles current political feathers, and better if it does so £££-focused ‘politicians’…. like his speeches on faith & climate change…

Prince Charles does sometimes get it wrong, but not as horribly wrong as an awful lot of politicians. And though I don’t always agree with his passions, I applaud the fact that he speaks up for them.

I hate his support for some of the uber-rich oil sheikhs but love his devotion to the health of the environment and organic farming.

I agreed with his opinion of the National Gallery extension as a “monstrous carbuncle”. But here in Dorset we have to put up with Poundbury – a new town outside Dorchester that looks like Disney’s idea of a “traditional” English town, another monstrous carbuncle of the Prince’s devising. Like most humans he is full of contradictions.

Where voicing his opinions is concerned, the Prince can’t win. He’s not supposed to voice them in public because he’s a member of the Royal family. I don’t think there’s a law which says he can’t.

It has just gradually become the “rule” and the people who want him to stay silent are politicians and big business. If he voices them in private he’s “taking advantage of his position”. But ex-politicians have no difficulty with using their ex-position to influence things behind the scenes – and make money doing so, something the Prince doesn’t do!

Being in favour of free speech I’d like to see both the Prince and the Queen say what they think. I’d love to know what their opinions are and it doesn’t mean I have to agree with them! But I don’t think making them keep silent is, in the long run, good for the country. I also think that the Queen and Prince Charles probably have more loyalty (and certainly a far greater sense of duty) towards our country than any of our politicians.

Resonances with Dorset reader: “Put it another way – would you rather have Charles govern the country or Tony Blair?????????”