Media 88: mainstream silent as the Church of England fails to bless the bomb

Survivors of the Nagasaki bomb walk through the destruction as fire rages in the background.

The third clause in the Bishop of Chelmsford’s motion at the General Synod Debate on the UN Treaty to Prohibit Nuclear Weapons:

(c) commit the Church of England to work with its Anglican Communion and ecumenical partners in addressing the regional and international security concerns which drive nations to possess and seek nuclear weapons and to work towards achieving a genuine peace through their elimination.

The first six pages of an online search found no reference to this decision in any member of the mainstream media (MSM) secular press. Only one entry – from the Defence Journal – recorded the event.

Political damage is being done by social media’s highlighting of the austerity-excused trials and deprivations of the poorest and most disabled. Today it has been announced that the church is now reaching out ‘primarily to people under 40-years-of-age who have no current connection with a church’ – on pioneering café-style premises in in coastal areas, market towns and outer urban housing estates.

Threatening? If the basic tenets of Christianity are taken to heart, enormous damage will be done to the sales of:

And the legal profession’s earnings will slump. 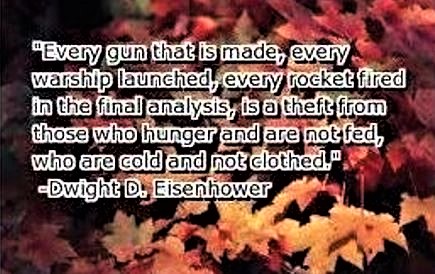 President and former General Eisenhower would have approved of the Synod’s decision. He said : “Only an alert and knowledgeable citizenry can compel the proper meshing of the huge industrial and military machinery of defense with our peaceful methods and goals, so that security and liberty may prosper together” (farewell address)