← UN chief warns new government funding for fossil fuel exploration or production is “delusional”
In a week of economic and political chaos, the British people are realising they have been deceived →

Land use: sell to corporates looking for ESG asset opportunities or retain for growing wholesome food?

Farmland . . .  is no longer about food production according to Savills real estate services; it now “presents a real asset opportunity that is high in ESG values”: Merryn Somerset Webb, editor-in-chief of MoneyWeek.

With about 7 billion trees, I think, we are one of the least forested countries in Europe, and there is a case for more trees—the right trees in the right place. I cannot understand why there is not a complete ban on using food-producing land for solar farms, when all the flat roofs of the warehouses and factories in this country could be used for that.

Farmer Edwin E Hughes from Flint asks the powers-that-be to see sense in future and cover more industrial buildings with solar panels, leaving thousands of acres of good land to grow food for the nation.

He ends: “With the horrendous invasion of Ukraine, which exports so much of the world’s wheat and maize, food security should be vitally important. Britain’s self-sufficiency in food production has dropped over the last two or three decades. In a few months we will all see our household food bills rising, particularly due to the situation in eastern Europe”. 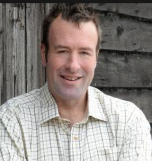 Stuart Roberts, NFU Deputy President, (left) insists,“We cannot allow private companies to relentlessly pursue farmland in order to greenwash their emissions but in the process remove family farms from land they have farmed for generations.

“Without British farmers we would become more reliant on food imports, produced to environmental and animal welfare standards that would be illegal here, as well as lacking our net zero ambition.”

← UN chief warns new government funding for fossil fuel exploration or production is “delusional”
In a week of economic and political chaos, the British people are realising they have been deceived →