Nationally and internationally eminent researchers and commentators are focusing on the damage done to damage the environment and human health by agriculture (example).

This, in a country whose manufacturing industry was the first to pollute its air, water and soil and whose armaments industry continues the process (see a recent study of pollution caused by war activity, during development and testing of hardware, weapon systems and procedures, war operations and subsequent reconstruction).

A country which could and should provide its own staple food is becoming increasingly dependent on imports because their family farmers have been grossly underpaid for many years by middlemen and large retailers. According to the NFU (2015), the number of dairy farmers in England and Wales has halved since 2002 – cause and effect.

As family farmers leave in droves each year we must assume that the country’s environment and human health will improve by leaps and bounds. Not so, their land will be bought by those largescale investors who have reaped the benefit of EU subsidies for so many years. 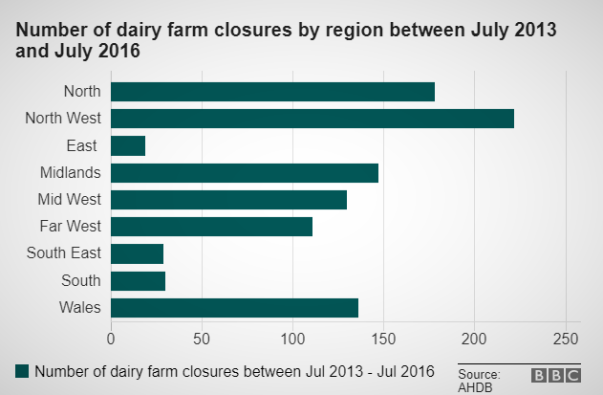 William Taylor and other leaders of Northern Ireland’s farming organisations have been actively lobbying politicians from all parties and none. Their August press release ended:

Farming families traditionally were charity givers, now 25%+ are living below the poverty line, therefore, denoting complete current Government policy failure. FFA therefore call on the Westminster Government to implement legislation on farm gate prices which would return farmers a minimum of the cost of production plus a margin inflation linked forthwith across the staples throughout the UK to force fairness into the food chain for farmers immediately.

There is now proof from University College Dublin that in the farming industry every new job on a farm would create 4 down the line and whilst farming is not viewed by Westminster as the biggest UK industry in money terms (partly the fault of the food corporates) it is the largest UK industry by tonnage handled, 60%+ of all commercial road vehicles haul food or food related products to give but one example.

If legislation on farm gate prices is not forthcoming from Westminster, such as that being sought at Stormont when it re-sits to sort the UK’s farm gate price crisis, then it will confirm what we all suspect, the large food retailers are out of control with their influence in ‘Democratic’ Westminster, the limited powers of the supermarket Ombudsman’s Office a case in point!