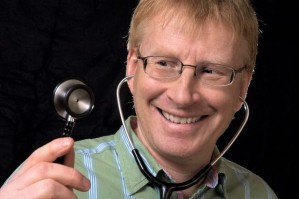 Phil Hammond, physician and broadcaster is known for his humorous commentary on the NHS. He first came into the public spotlight writing a column for The Independent newspaper, where he took a strong pro-patient rights line.

He qualified as a doctor in 1987, working as a GP before retraining as an associate specialist in Chronic fatigue syndrome. He has also worked as a lecturer in Medical Communication at the Universities of Birmingham and Bristol

NHAP has announced that Dr Hammond will be standing as a parliamentary candidate for the National Health Action Party at the next general election. Dr Hammond will be running against Conservative MP, and Brexiteer, Jacob Rees-Mogg in the seat of North East Somerset.

The seat voted overwhelmingly to remain in the European Union. However, the constituency feels strongly that its concerns are being ignored by Mr Rees-Mogg. The NHA believes that Dr Phil Hammond has a strong chance to win the seat if other progressive parties put aside their tribal loyalties and create a Progressive Alliance.

Dr Hammond has, however, made it clear that if a stronger candidate for such an alliance comes forward, he will of course step down.

Dr Phil Hammond’s reasons for standing for the NHA may be read here.

Posted on September 4, 2018, in Admirable politician. Bookmark the permalink. Leave a comment.