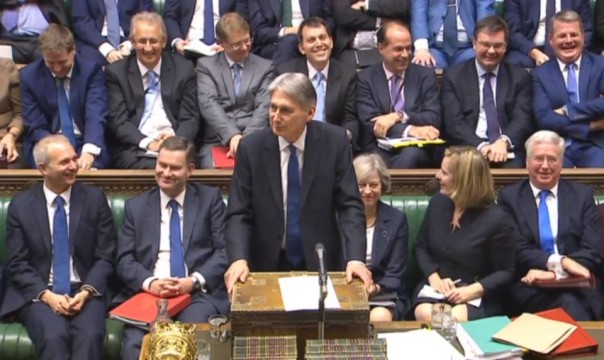 There was an outcry when the Chancellor Philip Hammond unveiled a National Insurance hike for self-employed workers in the Budget – now postponed. Some 4.6 million people, around 15% of the workforce, are now self-employed and data from the Office for National Statistics show that two thirds of new jobs in the UK created in recent years are down to self-employment.

Self employment, often insecure, low-paid, with no access to holidays, sick pay, maternity and paternity leave

Now sometimes known as ‘the precariat’, the self-employed, often work in service industries such as fast food, for security firms on temporary, even zero-hours contracts, or in the so-called ‘gig economy’. The precariat includes many workers who used to have skilled or semi-skilled but relatively well-paid and secure jobs, under-employed graduates, often working in insecure jobs requiring a much lower education level, migrant workers, and people from ethnic minority communities.

Well-informed readers explain that – as long as the self-employed have a contribution record established – they get the standard state retirement pension and older self-employed workers attaining pension age today have, in many cases, some pension accrued as employees for a number of years of their life which the present generation will not have. Benefits the self-employed cannot access relate to holidays, sick pay, maternity and paternity leave. 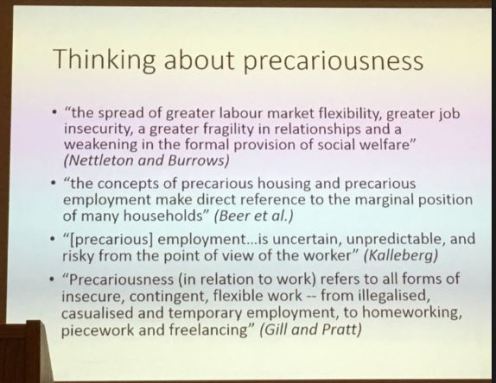 Earlier this month it was reported that Labour is to convene a summit to develop a new deal for self-employed workers and small businesses to develop Labour’s policy on self-employment. – recognising “that the world of work itself is changing”. John McDonnell, the shadow chancellor, said.

“The labour movement has risen to challenges like this in the past. It was born out of the struggle for decent pay and conditions when new technologies were ripping up existing ways of working . . . We need that same spirit and vision again. So I’ll be convening a summit next month of unions, the self-employed, and small businesses to develop Labour’s policy on self-employment”. 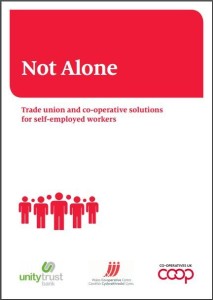 Some have been in the forefront, pressing for such action, including Pat Conaty, David Hookes and – for many years – Guy Standing. Pat writes: “The work of Professor Guy Standing at UCL SOAS and formerly at the ILO for 36 years on the Precariat Charter is superb”. See the links at the foot which include Standing’s 2011 Policy Network article.

Pat Conaty, Alex Bird and Philip Ross produced the Not Alone report that Co-operatives UK and the Wales Co-operative Centre have published with Unity Trust Bank – the trade union bank. It focusses on the needs of people in self-employment who face low income and social and economic insecurity – the ‘self-employed precariat’.

The executive summary records that there are now more self-employed workers than at any time since modern records began. Some 4.6 million people, around 15% of the workforce, are now self-employed and data from the Office for National Statistics show that two thirds of new jobs in the UK created in recent years are down to self-employment.

Many of the self-employed are among the lowest-paid workers in the country; their potential income is eroded by other costs such as agency fees and additional challenges relate to difficulties in not being paid on time and not having the right to a contract.

The report calls for the ‘cousins of the labour movement’ – co-operatives, trade unions and mutual organisations – to come together and help form cohesive institutions to unite the self-employed precariat, as illustrated in the model of a ‘solidarity economy’ partnership.

As Conaty says in correspondence: “God knows something has to be done for zero hour workers, growing ranks of exploited self-employed and those working all hours of the week in the gig economy to make ends meet”.