Assisted dying: most British politicians and some religious and financial interests are not respecting public opinion which is overwhelmingly in favour

On this site last year a Pretoria judge’s approval of the right to die with dignity was recorded.

Breaching the evangelical Christian consensus, former archbishop, Lord Carey, and Archbishop Emeritus Desmond Tutu have declared themselves to be in favour of assisted dying for the terminally ill and those in a situation of intractable, unbearable suffering.

Journalist Katharine Whitehorn visited Oregon in 2008, one of the places in which assisted dying is legal – some American states, Switzerland, Denmark, Holland and Belgium. She points out that far from the sad, the poor and the unwanted being ‘shuffled off into the hereafter’, it is mostly the strong-minded and competent who choose assisted dying, for more than one reason:

Some readers might want to see the video of the Cambridge Union Society’s debate in January 2014. The proposition was ‘This House Would Legalise ‘Assisted Dying’. The speakers in favour of freedom of choice in “last matters” won the debate by a clear 207 to 67 votes (with 54 abstaining). When will UK politicians listen?

It was good to read that one of several good policies presented by the new Canadian premier, Justin Trudeau, is support for assisted dying:

“The high court struck down the prohibition on doctor-assisted dying last February and gave the federal government a year to come up with a new law recognizing the right of clearly consenting adults who are enduring intolerable physical or mental suffering to seek medical help in ending their lives”.

Quebec already has its own law, which came into effect Dec. 10. Since then, one patient in Quebec City’s university health-care network has received a doctor-assisted death.

During the last 14 years, over 300 Britons have travelled to Dignitas in Switzerland for a professional, medically supported and accompanied suicide.

These people would rather have had the choice of a self-determined end of suffering and life at home.

The law in the UK needs to change. Dignitas supports the campaign and new court case to change the law in England & Wales. Though public opinion is overwhelmingly in favour (see Panorama poll below) as past votes in the Lords and the Commons have shown, a majority of politicians and some religious and financial interests are not respecting public opinion. 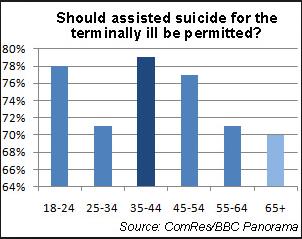 Further court cases are needed to bring about change.

Solicitor and Partner Saimo Chahal, of London Law firm Bindmans, alerts readers to the fact that there is a legal campaign to change the law in England & Wales, started by Elaine Spector and two further individuals, who wish to remain anonymous – V and J.

Many will echo the wish of the Dignitas team: “May we all live to see freedom of choice and human dignity in life and at life’s end in England & Wales and around the world”.

If you are interested in joining the legal campaign please will you email Saimo Chahal on s.chahal@bindmans.com.